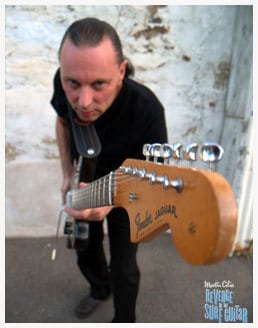 1963 was a big year for instrumental guitar music, particularly surf music. “Pipeline” by The Chantays, “Wipeout” by The Surfaris, “Bombora” by The Atlantics , “Dance On” and “Foot Tapper” by The Shadows all topped the charts.

All of these instruments just happen to be from 1963. It just worked out that way because they all had a unique sound that attracted me.

Inspired by “that sound”, Martin Cilia, guitarist with legendary Australian surf band, The Atlantics, has taken a step into the solo spotlight with the release of “Revenge Of The Surf Guitar”. This 16 track CD is his tribute to early sixties surf guitar music.

A true labour of love, Martin wrote all tracks, played the majority of instruments and produced the project.

An avid collector of classic electric guitars and amps and always a perfectionist, Martin’s unique playing ability is complimented by the sounds of some exceptional instruments: a 1963 candy apple red Fender Stratocaster, a 63 black Fender Jaguar, a 63 Fender Vibroverb, a 63 Fender Outboard Reverb Tank and a 63 Fender Jazz Bass.

“All of these instruments just happen to be from 1963. This was not planned. It just worked out that way because they all had a unique sound that attracted me. I played the Jaguar on 95% of this CD. This is the first time I have used a Jaguar and discovered an amazing sound”.